I’m delighted to share this book with you! It’s been a bestseller and recommended book on small press distribution.

The book is available through Amazon,  through your local bookstores, and through SPD. You can read a few pages inside the book on Amazon, and if you like the book, I’d be so grateful if you could leave it a review! Thank you!  You can also order through my website here.

"This masterful debut reveals for each reader new depths of nature, self, family, and world by opening our tiniest and most intimate perceptions. Colburn’s poetics balances image with absence, silence with sound. These elegant poems take on the questions of our day: can we have our sweet domestic lives when the life of the planet hangs in the balance? What does it mean to create and nurture a new human being in this perilous age?"

“This is a book that will reward both readers of poetry and those seeking insight into suffering and resilience. An exhilarating read.” —Chase Twichell author of Things As It Is

“What a tender book! What an example of how to maintain tenderness while telling the truth!” —Jericho Brown author of The Tradition

The poems in The High Shelf are about love, mothering, trauma, environmental destruction, injustice, healing, emptiness, and finding meaning.

They’re about big questions and about silence –traumatic silence as well as grace-filled silence.

And they’re about the power of art-making, language, and beauty.

Praise for the Book and Reviews:

CHASE TWICHELL
AUTHOR OF THINGS AS IT IS

“Music,” said Victor Hugo, “expresses that which cannot be put into words and that which cannot remain silent.” That’s true of the best poetry as well, for it is where words come up against the limits of their meanings that the most profound expression is possible. Nadia Colburn’s poems live in that zone, equally at home in the familiar world and one in which human language falls away, giving us startling glimpses into another kind of perception. The High Shelf is an intimate record of hard spiritual and intellectual work. Spare, brilliant, and open-hearted, these poems do what we most need art to do in this perilous age: they show how the mind invents both itself and its world, and thus where our responsibility lies. This is a book that will reward both readers of poetry and those seeking insight into suffering and resilience. An exhilarating read.

JERICHO BROWN
AUTHOR OF THE TRADITION (WINNER OF THE PULITZER PRIZE)

Nadia Colburn’s The High Shelf follows the life of a mind as it becomes more and more aware of threats that mean the end of the natural world, “And when the words came: O Land of the very-seen:/alive and green: how even the hills were /conspirators.” And yet these are love poems that call out to one whom the speaker hopes can inhabit that very same world, “O: little one: all this that is not mine/to give you, what will I give you?” What a tender book! What an example of how to maintain tenderness while telling the truth!

Reading Colburn’s poems, I picture a wall of dioramas in which every object is a thought and every thought is an object. Holes dug in the sand become “spaces for the soul to fit into” and lemons toggle between representing the body, the intellect and the soul. Likewise, these spare, philosophical poems (prayers/ reckonings) are as likely to make the mysterious explicable as they are to make the mundane miraculous. Colburn quietly insists on multiplicity—the world is both “a box with a mirror,” and “a high shelf” and these poems compel us to reflect and reach alongside her.

Memorable and moving, these pared-down poems have a compelling tensile strength.

Spare, elegant, and perceptive, these poems are charged with the numinous, a haikulike attention to essence. Some pieces recall Hopkins’ notion of inscape: “The world in-latched. Of-itself made.” Colburn’s lines often hesitate, stopping themselves with a dash, colon, or spaces (“So many, so many, each one: // one:   numberless:”), a powerful silence similar to rests in music or white space in a painting.

The willingness to be permeable, to be made new, is a hallmark of the heart-mind of Colburn’s work, as is her recognition of the radical kinship between the human and the more-than-human realms. Here, the sensitively observed natural world offers the speaker a model of willingness and receptivity toward “what passes through.” As the speaker opens herself to tree, birds, and nest, she opens herself to transformation in her own life. After the safe-but-suffocating space of the box, this space of deep communion with the living beings around and within her feels healing and holy. Again, the red door stands open, allowing the world to enter…The poet’s steady and accurate seeing of her fellow beings, her refusal to romanticize or distort, feel like a form of love, much as Simone Weil asserted that absolute attention is a form of prayer.

Colburn’s speaker has a steady eye and ear on the natural world and its fragility. The poems are eager, informal, careful. Of a pregnancy: “Come into the world,/ At center, a silence; activity, a cry/ too high to hear.” She is full of worry: “Yes, certainly we will destroy ourselves.” One distinguished poem is a list of extinct birds. “Survival” is a fine short poem full of stops and starts! Nature is masterfully evoked. The dazzling finish is a long poem about lemons, source of the tart and the sweet.

ANDREA BAKER
AUTHOR OF EACH THING UNBURIED IS BROKEN

Throughout Colburn’s stunning debut, a motionless turbulence intersects with the fluency of nature, beauty, and personal awareness. “The sky looks like something unspeakable about to be/ said. Then doesn’t say it…” From within this liminal state, pastoral elegance turns on itself and silence signifies both displaced traumatic experience and a search beyond and through that trauma. Colburn’s collection is gorgeous and devastating. Several poems reference “…a box… that might hold all of us—// safe// from everything we wanted to escape…” It imposes debilitating limits while offering quasi-protection. The task of the self, in a landscape that is dangerous and endangered, is to come to terms with body and spirit, and Colburn is a trustworthy guide.

This collection asks us to take the simplest of our moments as the most profound, to revel in our most ineffable powers—to create life, to nurture it, to perceive its mystery in the cracks that illuminate daily reality—even just to breathe. If the Buddha had been a woman, a mother, these are the poems that could have appeared.

Read some poems from The High Shelf

“Namelessness,” is about the experience after trauma: what do we do when we can’t quite make sense of what has happened to us, how do we store that information in the body?

In the box I put the body. There were no words
for what had happened.

Outside, all the other boxes. In some, no movement
at all. In some, dancing.

The color like a deep blue lake reflecting the color
of sky:        who could say which was original, which the interior,
which the exterior.

Or like the color of the sky at dusk opposite the setting sun:
all silver and the lake beneath all silver: as if something were
about to happen
or had only just occurred.

“The World’s Mirror” is about the way we find ourselves through the act of attention.

The mind imagines itself gone:
steps back, comes closer:

up high, one last leaf
moving,
as if of its own

Read an interview with Nadia about The High Shelf in Mass Poetry:

“Where do your poems most often come from—an image, a sound, a phrase, an idea?”

These poems came from a feeling. I was trying to match an image with a feeling or an idea with a feeling. I have a poem called “The Feeling of Trying to Express the Feeling I can’t even Name.” That’s a kind of extreme example of a poem reaching into silence. But I do think that most of my poems interact in one way or another with silence–sometimes a difficult and traumatic silence, and sometimes a more sacred, grace-filled silence. These days my poems tend to come out of a more peaceful silence, but the poems in The High Shelf are often interacting with a more difficult silence, trying to find where it intersects with the grace-filled silence, because I actually believe that there’s a place where all the different silences meet. 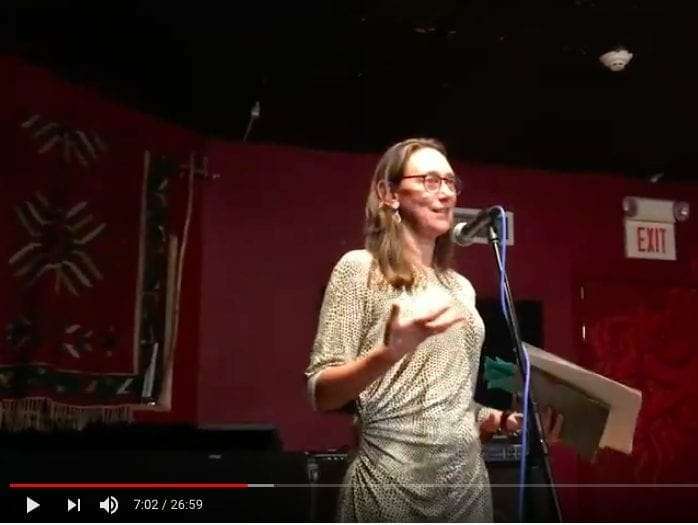 I hold a Ph.D. in English from Columbia University, and a B.A. from Harvard, am  certified Kundalini yoga teacher and an Order of Interbeing aspirant in Thich Nhat Hanh’s Plum Village Tradition.

And my poetry and prose has been published in more than 80 national magazines, in such places as The New Yorker, American Poetry Review, Kenyon Review, Conjunctions, Spirituality & Health, and elsewhere.

My work explores questions of trauma and healing, silence and voice—on the personal, social and global levels.  I work with women (and some men) to help them uncover the true power of their own creative voices.