Mindful Art-Making, Re-Imagining the Future, Living up to Our Potential and Talking about Generative Scribing with Kelvy Bird 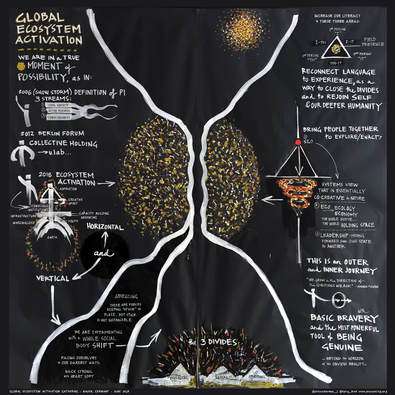 How do we respond to challenging times? How can art-making help us literally see differently so that we are able both to respond accurately to the present and to re-imagine the future?
​
I’m delighted to share a conversation/ interview with Kelvy Bird about her new book Generative Scribing: A New  Social Art for the 21st Century in which she discusses just these topics!

Full disclosure: I coached Kelvy on the process of writing this book. We worked together from the initial concept to getting a clear structure and format for the book, and through a lot of doubts and resistance that sometimes blocked the always-present big vision and importance of this project!

One of the things I love about the work I do is the way is the synergy between my interests and the interests of the writers I work with. Though I hadn’t heard of generative scribing before, when Kelvy described it to me I was immediately intrigued, and the more I learned the more enthusiastic I became.

This is really a beautiful and inspiring book, and I’m so glad it’s in the world!

​
The book is for anyone interested in both the product and the process of making art;  in both seeing and responding to what we see;  in the demands of the present and what we are able to imagine for the future.

Whether you’re a visual artist or a writer or work in any other form, the book presents a beautiful model for how to be present with our own dynamic creative process.

I hope you’ll watch the video and share it with others if you enjoy it.

I find Kelvy’s work really inspiring and I hope you do, too. Here’s one of the things she says in our interview “in these challenging times I’ve found that my coping strategy is to create. I’ve always created, but I feel especially now that the most impact I can have is through trying to connect with potential  wherever I sense it, if it’s in a person or with how I’m drawing or in writing a book.”

I hope you enjoy the interview below.

If you enjoyed this please explore my other interviews:

Transcript of Video Conversation
​With Kelvy Bird and Nadia Colburn

​Nadia Colburn         00:03              Hi, I’m Nadia Colburn and I am here today with Kelvy Bird. We’re going to be talking about generative scribing. Kelvy is an internationally recognized graphic facilitator and she’ll tell you more about what that means and her book, Generative Scribing, was recently released. We’re going to be talking about that today. I am Nadia Colburn and I am a writing teacher and writing coach and you’ll learn more about what I do as well. So let’s begin.  So thank you Kelly for being here with me.

NC:                              25:40              Yeah, that’s really beautiful because we can think again, we can think the future is heading just in this one direction, but there so much more potential than we’re often aware of. If we can really be aware of that full presence and then tap into all of our sources so that we can manifest, we can create what we want to create. And again, as you said, you’re not creating a fantasy. You’re creating from what you see, what’s necessarily in the moment, what’s grounded in the present with discernment and, and you know, a lot of beauty.